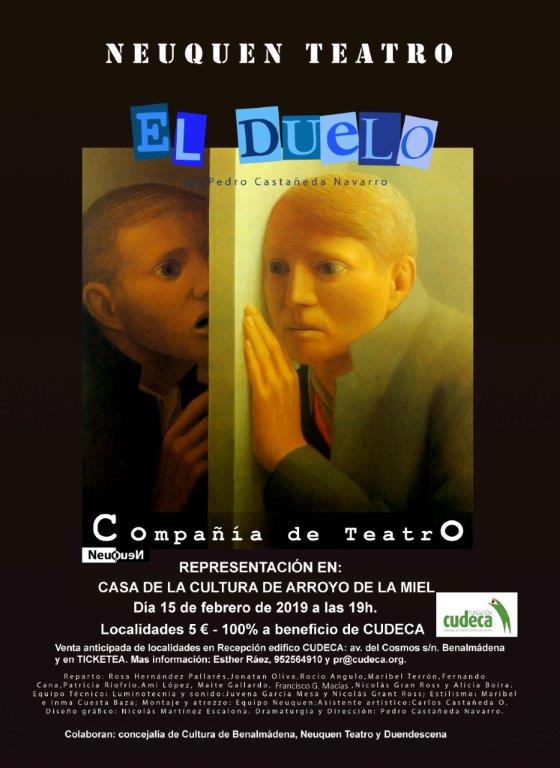 On Friday 15 February at 19.00h at the Casa de la Cultura in Arroyo de la Miel, the theatre company NEUQUEN TEATRO will perform their play El Duelo to help us to continue our special kind of caring (the play will be performed in Spanish).

Encouraged by a remarkable spirit of solidarity, the members of the theater company NEUQUEN TEATRO have come together to perform this play for solidarity purposes. The solidarity ticket will have a cost of 5€ per person, being all the funds collected entirely destined to us. Tickets are on sale on the online site of Ticketea under the name of "El Duelo por CUDECA" and at the reception of our palliative care center of CUDECA in the avenida del cosmos s/n in the Arroyo de la Miel from 8.30am to 5.30pm Monday to Friday. They can also be purchased through Esther Ráez with the department of Communication and Fundraising of CUDECA mailing pr@cudeca.org.

Synopsis of the play:

The play, El Duelo, is the third part of a trilogy referring to the dramatic intricacies of a family constellation. El Duelo presents four dramatic scenes preceded by an introduction and finished off with a surprising ending. As a matter inscribed in the deep structures of the family tree and its links, the four acts will dramatize four situations that respond to the four basic forms of human anguish, the inseparable companion of our existence: schizoid, depression, obsession and hysteria.

The work will mark these drives in the different interpreters within the sphere of vital impulses such as love, hate, envy and jealousy, using very free versions of different biblical passages. It is represented by 12 interpreters from the University Theatre and the Faculties of Philosophy and Letters, Psychology, Communication Sciences and Fine Arts of the UMA.

The duration is 2 hours (approx.) and the scenic montage is simple and minimalist. NEUQUEN TEATRO is directed by Pedro Castañeda and Rosa Hernández; the author and director of the play is Pedro Castañeda Navarro.

The Company NEUQUEN TEATRO, sponsored by the Spanish actress Maria Barranco, has been organizing theatrical performances since the 90's aimed at the development and creativity of the performing arts: organization of Seminars on Techniques of Dramatization and Psychodrama, Theatre Workshops, Annual stagings of various plays (14 plays) at the University of Malaga (Aula de Maria Zambrano and former College of San Agustin), University Colleges, Secondary Schools, at the Caja Blanca, etc. He has also participated in the organization of the Week of Performing Arts in 2012. Some of its members belonged to the Image Technology Centre of the UMA, directed the University Theatre of Granada, have participated as extras or cast actors in various films and in the direction and script of documentaries.

The representation of this work will be possible thanks to the work of the professional cast of actors committed to the Cudeca Foundation and to the generosity of Duendescena, the Department of Culture of Benalmádena Town Hall and the altruistic disposition of the Casa de la Cultura del Arroyo de la Miel.