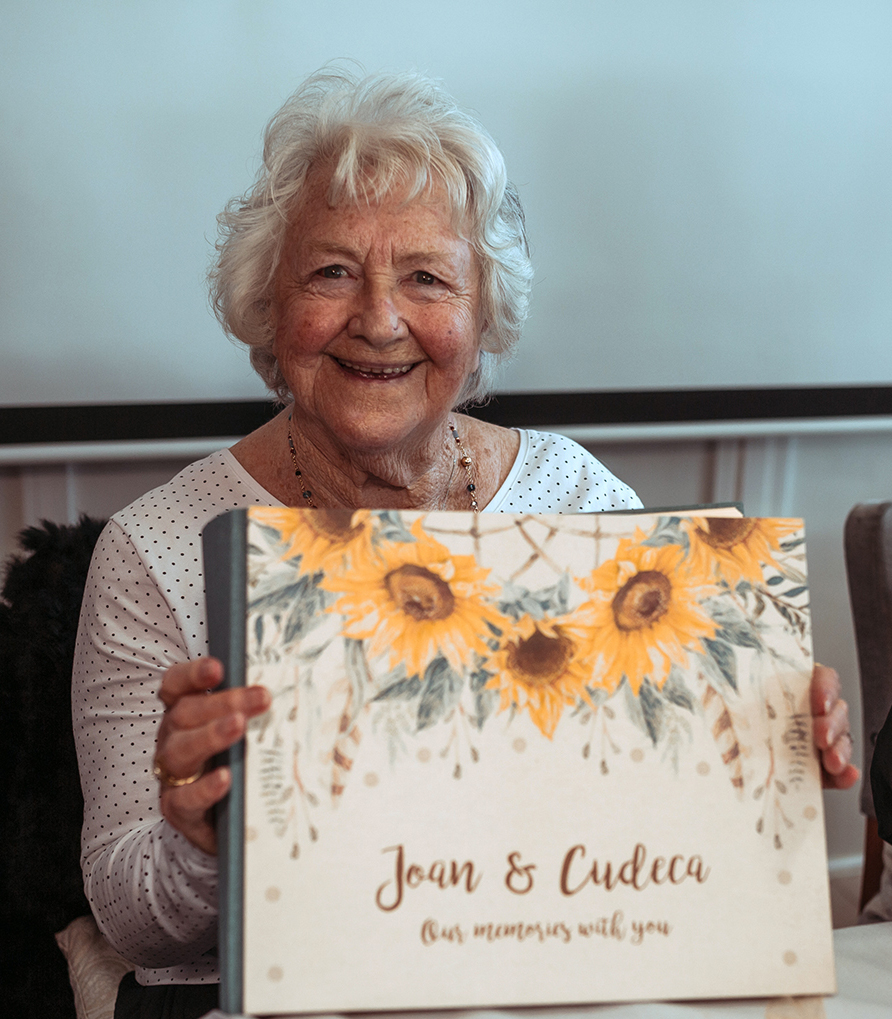 On January, we celebrated the 90th birthday of our Founder and Honorary President, Joan Hunt.

The birthday party took place in the training room of the hospice, which had been decorated with banners and handmade birthday decorations in the room, in addition to being responsible for the layout of the entire menu cooked by the workers themselves. Joan Hunt arrived at 14.00h where she was received with a great ovation among applauses and smiles by all those present, including her closest friends as well as personalities and employees. To their surprise, Blame it on the boogie by the Jackson´s Five was played and all employees lined up in their positions to perform a dance they had been rehearsing for more than three weeks without their founder knowing anything. They were all spread around the room and started to do their moves perfectly choreographed and enjoyed being able to give that special dance gift to Joan Hunt. The atmosphere was more and more relaxed and the expressions of surprise and joy of the founder served as a very high reward for everyone.

After the dance, Joan Hunt dedicated a few words to all attendees where she was pleasantly surprised and very encouraged to enjoy the party. At lunch, they could enjoy all kinds of homemade dishes cooked and prepared by CUDECA employees willing to share: from humus with nachos to potato tortillas, through sandwiches and empanadas, Russian salad, Ukrainian dishes, savoury cakes, including a variety of sweets and pies for dessert.

Marisa Martín, Chief Executive and Medical Director, together with Ricardo Urdiales, President of CUDECA, were in charge of reading a text dedicated to the life and career of Joan Hunt, emphasizing her difficult childhood and her great spirit of overcoming difficult times. Finally, the reading was very much applauded and everyone was very excited to have learnt a little more about the life of the founder of CUDECA.

Other friends of Joan who could not attend the party also wanted to take the opportunity to congratulate the founder. In a video projected in the room, 4 surprise messages pulled out more than one smile of emotion from Joan: Chef Enrique Sánchez of the Canal Sur Cómetelo cooking TV show applauded Joan's great career, thanking her for being one of her greatest admirers; Marisa Ballestracci, a former CUDECA employee and close friend, dedicated a few heartfelt words to the founder where she wished the best for Joan and the years to come; Maura Kinahan, one of CUDECA's oldest volunteers, congratulated Joan's birthday with a typical Irish phrase that brings many more years of health and, last but not least, a message specially dedicated to Joan from two of the most well-known actors in the Downton Abbey series, Mr. Carson and Thomas at the recording set, a series of which Joan is a huge fan.

The signs of affection towards Joan were constant throughout the celebration: employees and friends approached her to hug and congratulate her on her 90th birthday taking pictures with her and giving all birthday presents. The birthday cake was handmade by Olga (wife of one of the employees of the Foundation) with deep care and love, imitating the typical hat usually worn by the Queen of England Elizabeth II.

At the end of the party, Joan Hunt received some flowers and a handmade memory book which summarized her 28 years of dedication with photographs and more than 300 testimonies from trustees, Cudeca staff, volunteers and friends.

Many of those present were visibly moved to see Joan receive this gift. The founder would fall apart in gratitude to all with glassy eyes and contagious enthusiasm and joy for such an elaborate party full of surprises and heartfelt words from everyone.

Joan Hunt wanted to thank everyone for the effort and dedication to the dance (which was repeated spontaneously by everyone at the end of the party) and for the beauty of the decoration and the party, and left after the cake very excited.

To understand Joan Hunt's greatness, it is necessary to refer to her personal history before going to a well-deserved early retirement on the Costa del Sol.

I want you to get to know Joan the girl, the daughter, the student, the wife, the apprentice, the worker, the manager and, finally, Joan the leader of a great charity company that is the Cudeca Hospice.

Joan Hunt was born on 5 January 1929 in Liverpool. She was the eighth daughter of a family of nine brothers, of whom Joan is now the only survivor. Her parents, humble workers and fervent Catholics, were born in Ireland.

Little Joan soon knew the rough side of life. At the age of two she contracted a serious illness and began a medical process that would mark her entire childhood. Affected by severe septic arthritis, the infection damaged her hip, forcing her, as a child, to undergo several operations that involved an almost permanent hospitalization until she was six years old, and a lifelong limp.

In 1937, at the age of 8, the family moved to the outskirts of London, where there were more job opportunities for her father. When World War II broke out, Joan was only ten years old and her mother decided to send her outside the capital to the countryside with her uncles and cousins.

In 1943, she returned to London where the city was still at war. Her mother, though, who had to see clearly the brightness of her little daughter's intelligence, and in spite of the lack of resources at home, looked for a way for her to have a training oriented to a profession that would allow her to open doors and fend for herself. Thus, at the age of 14, she paid Joan for private classes to learn secretarial skills, accounting, shorthand and typing, which at the age of 16 would allow her to find her first job as an apprentice in a family business of leather goods, her first tasks being preparing tea and running errands.

Soon she began to work as a stenographer and typist and, finally, she would become involved in the management, accounting and commercial activities of the business.

It was also at the age of 16 when her mother died at 54, having to take care of the family, in addition to working.

Despite her hip condition, Joan struggled to overcome her limitations and to make the life of a normal girl her age: she loved dancing, and it was at a dance where she met her future husband, Fred. Nor would this episode be as easy and happy for Joan as she could have wished. Her decision to marry a divorced man quite older than her meant that she broke up with her family because of her deep Catholic conviction.

However, she went on with her life, with her husband, Fred, her social life in London and her work. And after 16 years in that small business when she was 32 years old, and gathering wide experience, she decided that she had to go one step further. She changed jobs and make the most of her potential, something that her former bosses did not share and who believed that no one would want to hire her.

In 1961, she started working for Berger Paints, a large multinational. Her skills were immediately recognized and within six months she was a personal assistant to the General Director. Thanks to her courage and dedication, she continued to make progress in the company.  In 1974, in a world that still did not leave much room for women in the business world, she was appointed Head of Personnel Administration. Her job was to manage the administration and payroll of eight factories in Great Britain out of a total of 14,000 workers. Joan Hunt became one of the very few women in senior management at the time.

Of the rest of her life we know more details: her early retirement and coming on to the Costa del Sol. And a new setback, the illness and death of her husband, Fred, to cancer. The illness she took from her husband did not kill her mood. On the contrary, it awakened in her a positive and supportive force, which will become the engine of something as wonderful as her vocation to help others at the end of life, when at the age of 65 and against all odds, an Englishwoman who did not know many people in Malaga, who did not speak the language and did not have resources, decides to create and implement this incredible project called CUDECA HOSPICE.

Joan always remembers the day she returned to the Red Cross Hospital, after Fred's death, to visit the doctor who treated them, Marisa Martín, and spoke of the dramatic change that had brought Fred, and also her, to have finally been treated in the small Palliative Care Unit of the Red Cross Hospital of Malaga, which had just been inaugurated. She told her that she had decided to devote the rest of her life to improving care for cancer patients and their families, and invited the doctor to accompany her on that journey. Joan inspired determination and the ability to do whatever she set out to do.

With the help of her tenacity, her passion and her tremendous experience in management, she made the CUDECA dream come true, which is well worth the dedicated effort of these twenty-seven years. Instead of enjoying her well-deserved retirement, she lived a second, more intense working life than the first, which, today, at age 90, still continues.

Now, I hope you know Joan a little better, the account of the difficulties of her life moves and the example of overcoming tough situation that Joan shows. Joan has always clung to the positive and has always known how to take advantage of the opportunities that have presented her in life.

Joan Hunt is an example of the power of the will; she is a constant example of social, moral and intellectual commitment. She believes blindly in the strength of the collectivity, of the community, the social surrender.  She inspires hundreds of volunteers with her example, she builds bridges of collaboration throughout society. To citizens on foot. To public and private institutions. To Athletes. To artists.

Thanks to all of them, CUDECA exists and cares for, relieves and accompanies every year more than 1,500 people in the final stage of life.

She has fought for this, with all her strength and dedication, making her own a phrase she likes to repeat: A vision without action is just daydreaming, and an action without vision is like a nightmare.  She managed to unite the two things, the vision of a center where to make the most difficult moment easier, and her ability to move into action and turn it into reality.

For all our luck, we need people like you Joan Hunt, your inspiration, your courage, your commitment and your entrepreneurial spirit and cheerful. You have shown us with facts what it means to bet on others, on people; to invest in people's dignity through efforts, and to ultimately reap a fairer, happier and happier society.