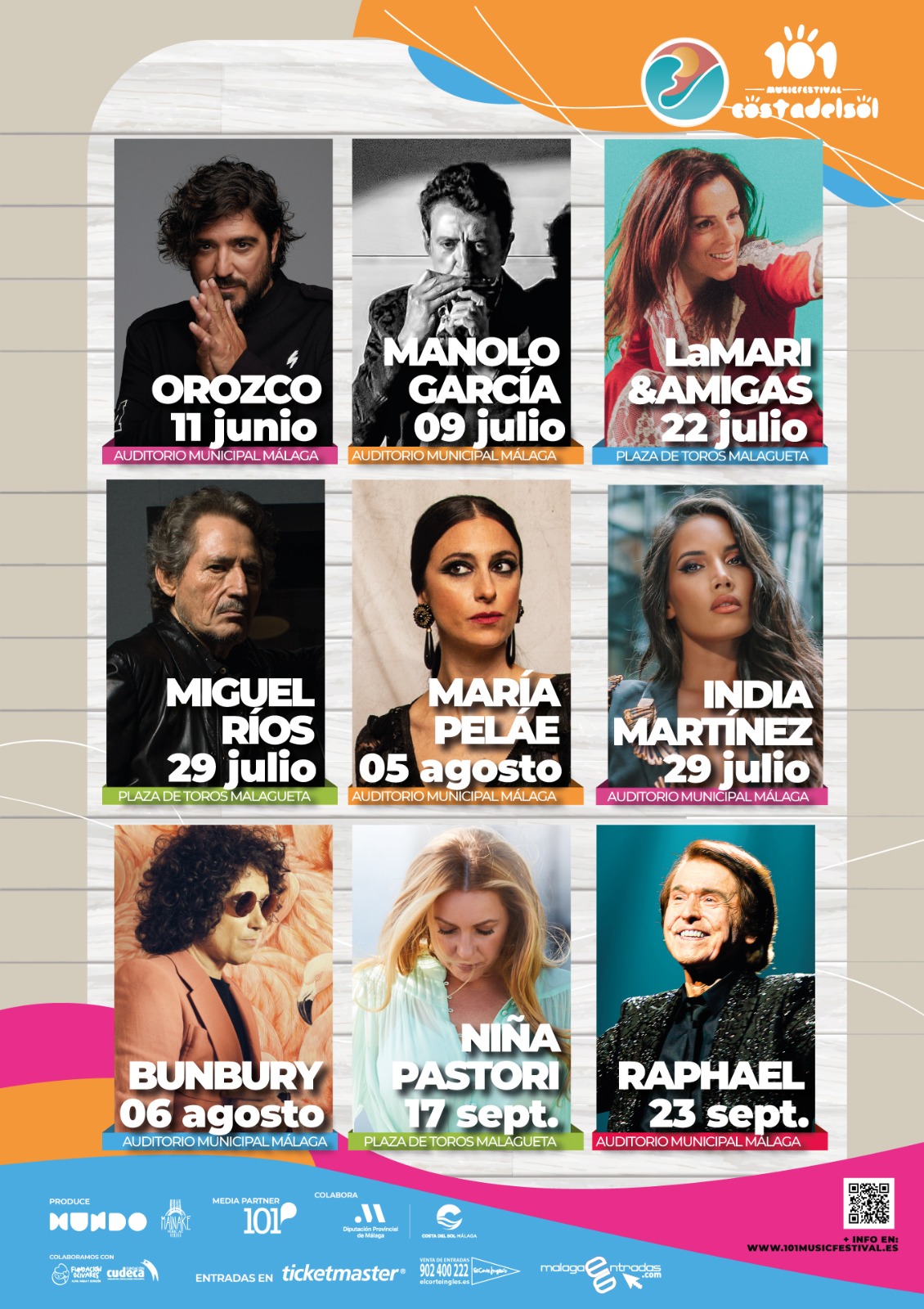 The Cudeca Foundation and the Olivares Foundation will benefit from the new music festival which was presented yesterday at the Malaga Provincial Council. The La Malagueta bullring and the Malaga Municipal Auditorium will be the venues for the 101 Music Festival Costa del Sol, a series of concerts that will bring together national music stars of the stature of Bunbury, Antonio Orozco, Raphael, Manolo García, Miguel Ríos, India Martínez and the Malagueñas La Mari and María Peláe. The President of the Provincial Council, Francisco Salado, presented this new event yesterday together with the press officer of Grupo Mundo, Francisco Moraleda, the assistant manager and financial director of Cudeca, Rafael Olalla, the president of the Olivares Foundation, Andrés Olivares and the artist La Mari. The company behind this event is Grupo Mundo, which has already collaborated with the Foundation on other occasions by helping us financially and communicating our work. This festival will begin in June and end in September offering the people of Malaga performances by national stars from the world of music, although the intention is to extend the line-up until the end of the year with new additions, in which the incorporation of more artists is being contemplated. One euro from each ticket sold at the Plaza de Toros concerts will go to Cudeca and the Olivares Foundation, which will have their own space in both venues to publicise their fundraising campaigns and the work they do to help people undergoing cancer treatment. In addition, more resources are being considered to raise funds for these two organisations. We thank Espectáculos Mundo for their gesture towards the two foundations and we are happy to be this festival hand in hand with the Olivares Foundation to which we have a special affection. In our next solidarity march on the 28th we will raffle tickets to these concerts already donated by Espectáculos Mundo.   Tickets: https://www.redentradas.com/?entradas=101-music-festival-malaga&eid=1910   Calendar With a full capacity, the concerts will start on 11 June at the Municipal Auditorium with Antonio Orozco and the stop of his Aviónica Tour. Manolo García, who returns to the stage with a new tour, will perform on the same stage on 9 July. An opportunity to reconnect with his Malaga audience and premiere his new works 'Mi vida en Marte' and 'Desatinos desplumados'. La Mari from Malaga will perform at the Plaza de Toros on the 22nd of July to celebrate her 20 years of musical career with a show in which she will review her most emblematic songs accompanied by her friends the artists Amparo Sánchez 'Amaparanoia', Esmeralda Rancapino, Rosario La Tremendita', Nya de la Rubia and Maui. India Martínez, who was nominated for a Latin Grammy, will bring her flamenco and pop repertoire to the Municipal Auditorium on 29 July and Miguel Ríos will perform his acoustic show on the same day in La Malagueta Bullring to celebrate the 40th anniversary of his career, accompanied by The Black Betty Trio. María Peláe from Malaga, with more than 12 years of musical career behind her, will come to the Municipal Auditorium on 5 August and the former vocalist of Héroes del Silencio, Enrique Bunbury, will give his recital on 6 August in the Municipal Auditorium. It will be one of his last concerts, as the artist has announced his retirement from the stage. Niña Pastori will also be part of the 101 Music Festival Costa del Sol. With 25 years of artistic career and four Latin Grammys, she will be performing at the Plaza de Toros de La Malagueta on 17 September. Raphael is the last of the artists confirmed for 23 September at the Municipal Auditorium to present the repertoire of his Tour 6.0, to commemorate 60 years on stage. The Municipal Auditorium has a capacity of 10,000 people and the La Malagueta bullring has a capacity of 7,500. Tickets can be purchased at El Corte Inglés, Ticketmaster and Málaga Entradas. All concerts will start at 22:00 except Raphael's concert which is scheduled for 21:30.