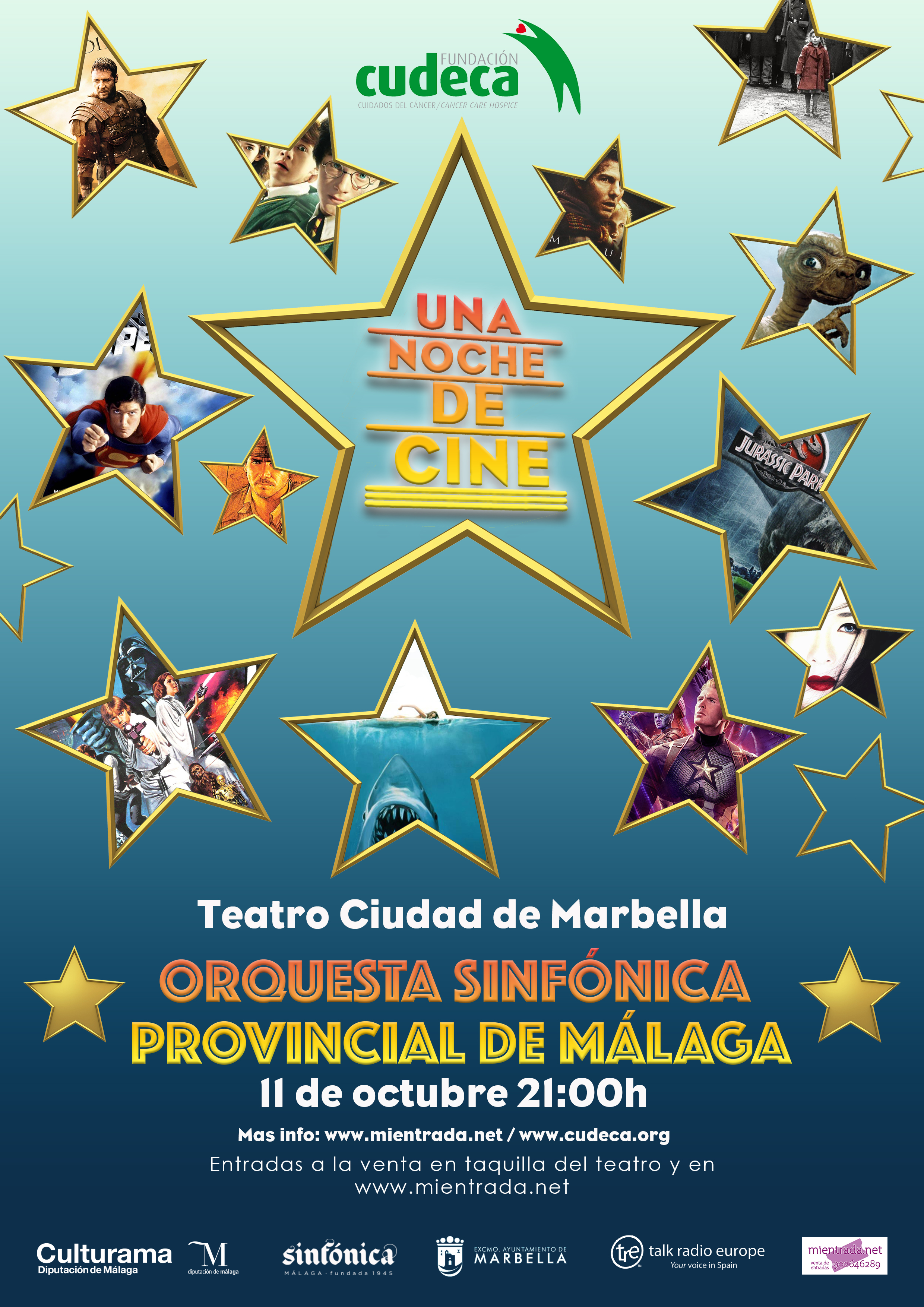 To mark World Hospice and Palliative Care Day 2019 (12 October 2019) we will celebrate on 11th October at the Ciudad de Marbella Theatre a Charity Concert called “A night at the Movies” thanks to the Málaga Provincial Symphony Orchestra with the aim to raise funds and offer professional medical care to patients suffering from cancer and other advanced illnesses, as well as support to their families.

“A night at the Movies”

The concert will start at 21h, and the orchestra, conducted by Pablo Urbina, will perform the best contemporary movie soundtracks:

The Málaga Provincial Symphony Orchestra is a Spanish symphony orchestra based in the city of Málaga. Founded in 1945 by D. Pedro Gutiérrez Lapuente and composed of musicians born or residents in Málaga, it is one of the oldest orchestras in Spain. Its main aims are music diffusion and to support the training of new artistic values.

Pablo Urbina (b.1988, Vitoria- Gasteiz, Spain), is a young Spanish conductor graduate from the Royal College of Music London, semifinalist of the 2017 Maestro Solti International Conducting Competition and a 2018 Nominee for the Nestlé & Salzburg Young Conductors Award. Currently the Music Director of the London City Orchestra, he was recently appointed Principal Conductor of London based Orchestra Vitae. In 2019 he was associate conductor at the Al Bustan Festival in Lebanon, and remains as Associate Conductor of the festival Suoni dal Golfo in Italy.

Tickets cost 15 euros and are available at:

Entry ticket is required from 3 years of age.

If you cannot attend the concert but you wish to collaborate with Cudeca Cancer Care Hospice, there is also a “Non-attendance ticket”(contributing without attending) which can be paid  into the following bank account: La Caixa  ES48 2100 7681 3523 00060031  Concept: Charity Cinema.

This year’s World Hospice and Palliative Care Day theme is ‘My Care, My Right’ and aims to communicate that palliative care can be demanded by the public - and that, together, every person impacted by a life limiting illness can influence their policy makers to prioritise palliative care financing under Universal Health Coverage.

•the number of people who experience serious health-related suffering is much higher, with an additional 35.5 million people requiring some degree of palliative care outside of end-of-life care.

•Less than 10% of the overall need for palliative care is being met globally.

•More than 80% of these cases are in low- and middle-income countries, where access to immediate release oral morphine, an essential and inexpensive medicine to alleviate pain, as well any other type of palliative care, is severely lacking.

•Global policies restricting access to opioids mean that millions of people are denied medicines to relieve pain linked to illness or injury.

Dr Stephen Connor, Executive Director of the WHPCA, explains: “The numbers are huge and so is the unmet need as only a minority of countries have implemented equitable palliative care programs through a public health approach. This year’s World Hospice and Palliative Care Day is about collectively saying, palliative care is the right of every man, woman and child. Together we can stop unnecessary pain and distress during illness and at the end of life.”

Campaign activities around the world include a 500 person Voices for Hospices concert in the United Kingdom, a TEDx style public speech in Shanghai, China, a public hearing on palliative care in the Sorcoba court of law in Sao Paulo, Brazil, as well as public events and celebrations across the world.

To find out more about World Hospice and Palliative Care Day 2019, visit www.worldday.org