“Remember the days” and celebrate the Armistice with the Cudeca Goldies 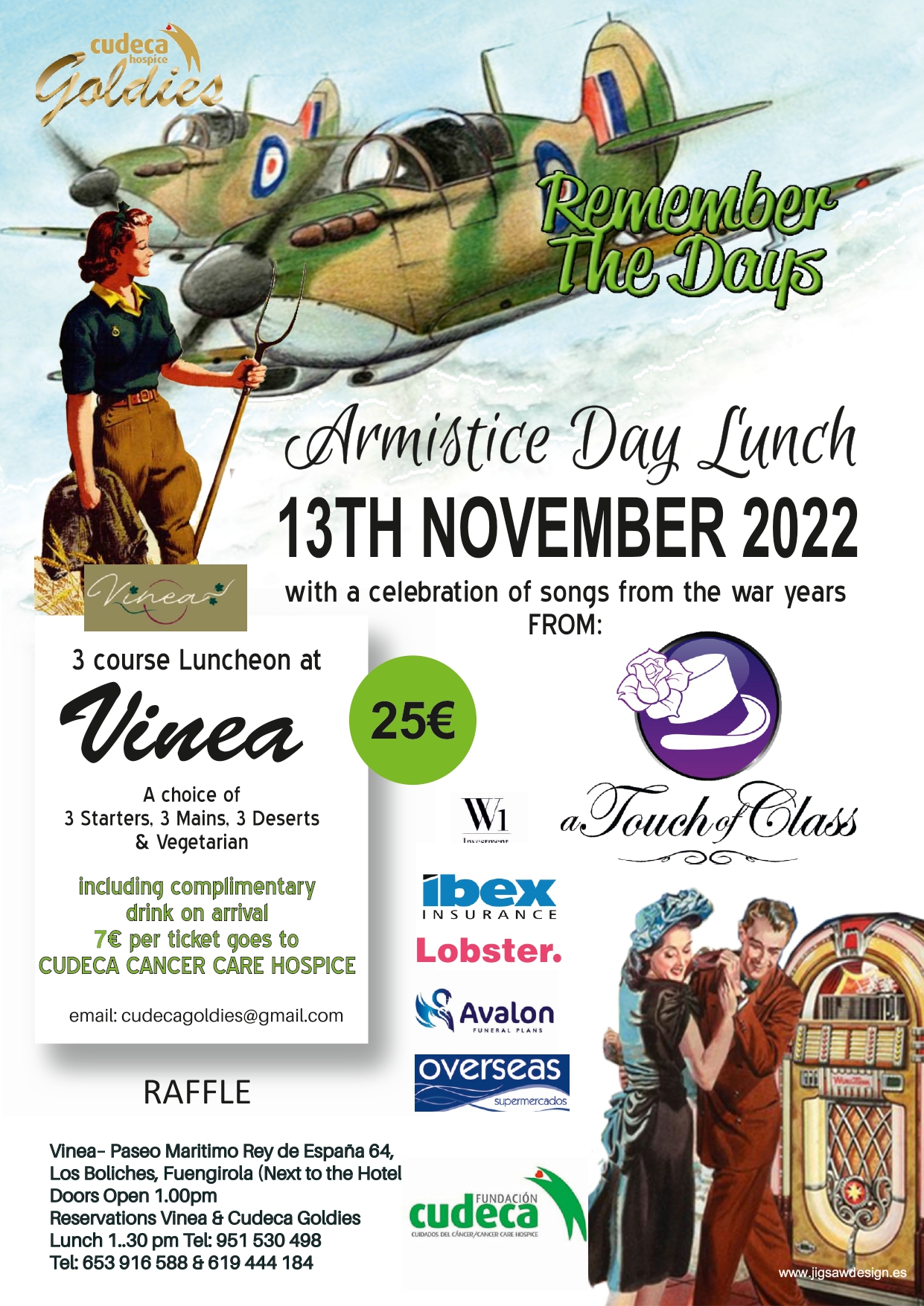 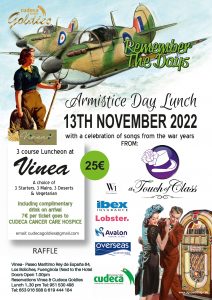 About the Armistice Day

Armistice Day is commemorated every year in November to celebrate the Armistice signed between the Allies of World War I and Germany at Compiègne (France) at 5:45 am for the cessation of hostilities on the Western Front of World War I, which took effect at eleven o’clock in the morning — the "eleventh hour of the eleventh day of the eleventh month" of 1918.

The Armistice initially expired after a period of 36 days and had to be extended several times. A formal peace agreement was only reached when the Treaty of Versailles was signed the following year.

The date is a National holiday in France, and was declared a National holiday in many Allied Nations. However, many Western countries and associated nations have since changed the name of the holiday from Armistice Day, with member states of the Commonwealth of Nations adopting Remembrance Day, and the United States government opting for Veterans Day. In some countries Armistice Day coincides with other public holidays.

On 11th November 2018, the Centenary of the Armistice, commemorations were held globally. In France more than sixty heads of state and government gathered at the Arc de Triomphe in Paris. This will contribute to the idea of how big  the celebration of this day is  and how relevant for the British Community in Fuengirola and surroundings to get together for a charity luncheon.

The day will commence at 1pm with a complimentary drink, which will be followed by a delicious 3 course luncheon with a choice of 3 starters, 3 mains, 3 deserts & vegetarian.

“A Touch of Class! will ensure a celebratory atmosphere with a delightful medley of sing- along songs which everyone will remember.

Join in the fun - bottle of champagne for the best 1930’s costume! And a raffle!

It will be wonderful to see you all again helping The Cudeca Goldies to put the fun into FUNdraising!

More about A Touch of Class

A Touch of Class was formed in May 2014 by Pauline Hulme, supposedly as a one off fundraising concert with a cast of five. Since then the group has grown in number to approximately more than 20 and their popularity going from strength to strength.

To date, the Show Group has raised around €30.000 for various charities on the Costa del Sol, inc Cudeca, AECC, Animal charities and various homeless and welfare charities that help families, together and separately.

In 2018 they were invited to go and perform their Old Time Music Hall show in Llandudno North Wales at their Victorian Extravanganza weekend. They performed 2 shows a day over the whole weekend, a brilliant experience.

If you have a charity that you wish us to support, you will need to provide a venue and sell tickets, they will do the rest and they have their own sound technician.

New members are always warmly welcomed into A Touch of Class.

No experience is necessary, just a team spirit, a love of music of all kinds, and a desire to reach out to those in need. They are a versatile fun loving show group that offers not only the

chance to perform on stage with songs, dances and sketches, but also to work backstage or wardrobe and the joy of being part of a loving, friendly supportive group of people both on and off stage.

If you would like to know more, come along to any rehearsal night in Los Boliches  St Andrews Church on Monday & Thursday from 6-30pm or call Pauline Hulme 633405884 or John Winsor 684045606 paulinehulme01@hotmail.co  or tocsecretarybird@gmail.com

You can also see all the historical photos and videos from past performances on our Facebook page at a Touch of Class.