QUEEN MACHINE in concert for CUDECA 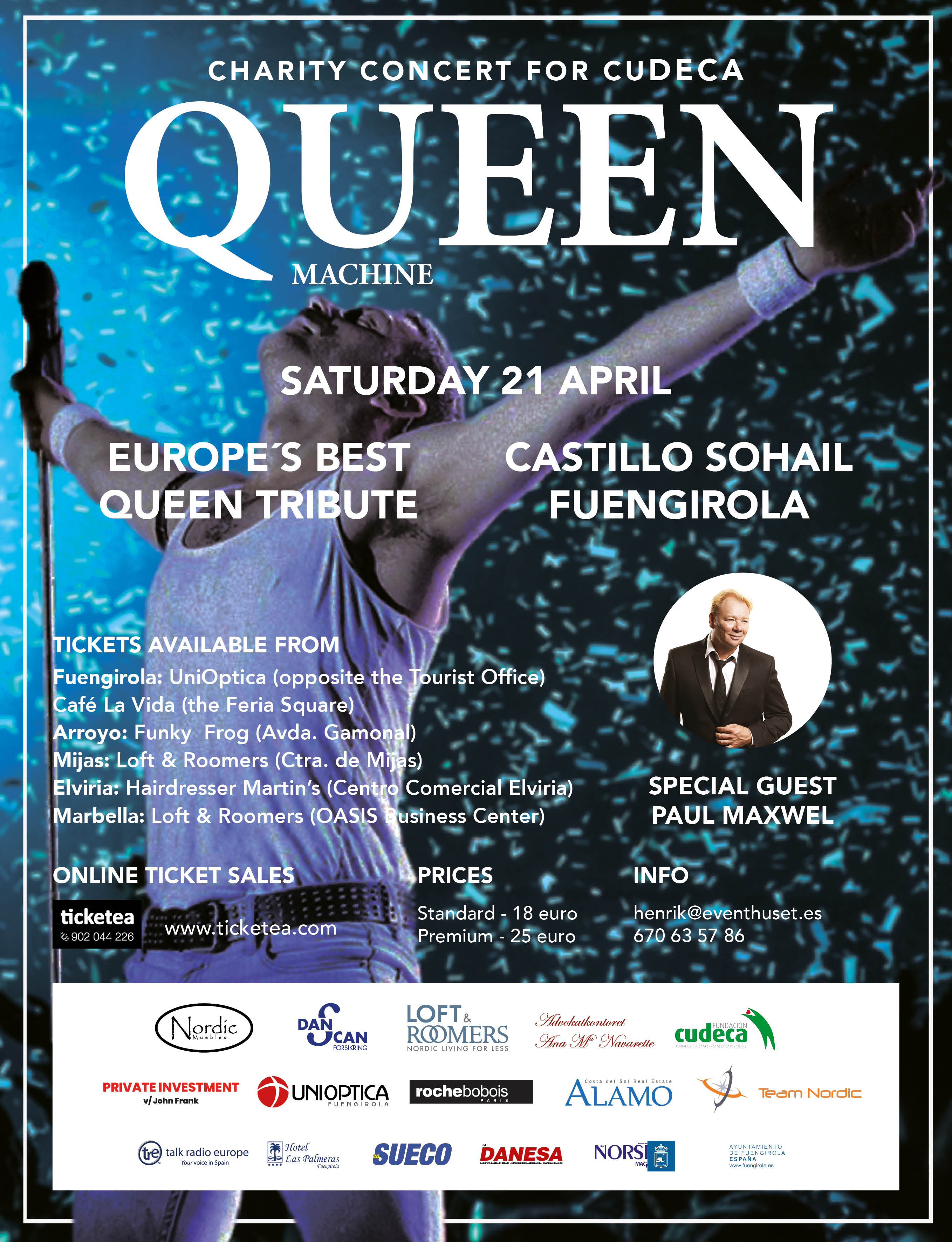 On Saturday 21 April, a great charity concert will be held in the Sohail Castle in Fuengirola with the performance of the best group tribute to Queen of Europe, QUEEN MACHINE, in aid of Cudeca Cancer Care Hospice.   All proceeds from the concert will be destined to the specialized and free care of CUDECA, which each year attends more than 1,400 people with cancer and other illnesses in advanced stage and with no possibility of cure, as well as offering support to their families. The care is completely free of charge and offered by doctors, nurses, psychologists, social workers, physiotherapists and qualified volunteers.   QUEEN MACHINE, the most loyal tribute band of the famous British band, gather thousands of followers in their concerts. “We're like Queen during their early years, when they always offered a repertoire full of surprises on stage. This is what the audience also expects from us,", says Peter Jeppesen, guitarist and spokesman for the group, which has been part of its history since its founding in 2007. “At that time we played just for fun”, he continues, “but suddenly things got serious - in a good sense of the word. From performing in front of a small audience in small musical venues, we went on to play in front of an audience of 10,000-20,000 people in the big festivals. It sounds incredible, but the audience wanted to see us perform, they wanted to hear Queen. And Queen Machine makes every effort to meet their expectations”, in Peter Jeppesen´s words.   “Lots of little things. The popular tribute group is committed to developing, perfecting and retouching the small details that make their concerts such an authentic replica. We are constantly presenting new shows and focusing particularly on the small details to make us look as much as possible like Queen," explains the Danish guitarist. “This is why the musicians' costumes are designed to reproduce Queen's original costumes, while her light show and choreography are an exact replica of what Queen used to wear during the great concerts of the 1980s. Every detail is meticulously reproduced, but unfortunately some of them are so small that they go unnoticed, like the pick used by the guitarist”.    Brian May and Roger Taylor gave their approval. This is not a standard pick, but the old original sixpence coin used by Brian May when the British quartet was at the height of their career. “A couple of years ago we had the honor of meeting the real Queen's guitarist Brian May and drummer Roger Taylor. They know who we are and they know our show, so we're counting on their approval," joyfully concludes Peter Jeppesen. Next comes an intense summer with new concerts all over Europe and the United States, where the band began its popularity last year. The concert will open doors at 19:00h and will begin with a performance by Paul Maxwel - also known as the Piano Man. Paul Maxwell frequently performs on the most popular stages in Marbella and has performed several times with prominent names such as Lionel Richie, Gary Moore, Michael Bolton and Ricky Martin. Paul Maxwel will perform the great hits of Elton John, Louis Armstrong, Tom Jones and Tina Turner as well as his own music accompanied, as always, by his beautiful white piano.     Prices and points of sale: General entrance fee: 18 euros. Not numbered seat tickets: 25 euros.   Online sales: www.ticketea.com   Physical sale:   Fuengirola: UniOptica (next to the tourist office) Café La Vida (Plaza de la Feria) Arroyo: Funky Frog (Gamonal Avenue) Mijas: Loft & Roomers (Mijas Road) Elviria: Hairdresser Martin's (Elviria Trade Centre) Marbella: Loft & Roomers (Oasis Business Centre)         Press Release QUEEN MACHINE live concert for CUDECA   Date: 21st April 2017 Time: 7 pm Location: Sohail Castle (Fuengirola) Contacto: henrik@eventhuset.es / 670 63 57 86       I CARE WITH CUDECA HOSPICE, DO YOU? www.cudeca.org/iniciativas-solidarias/YOCUIDO