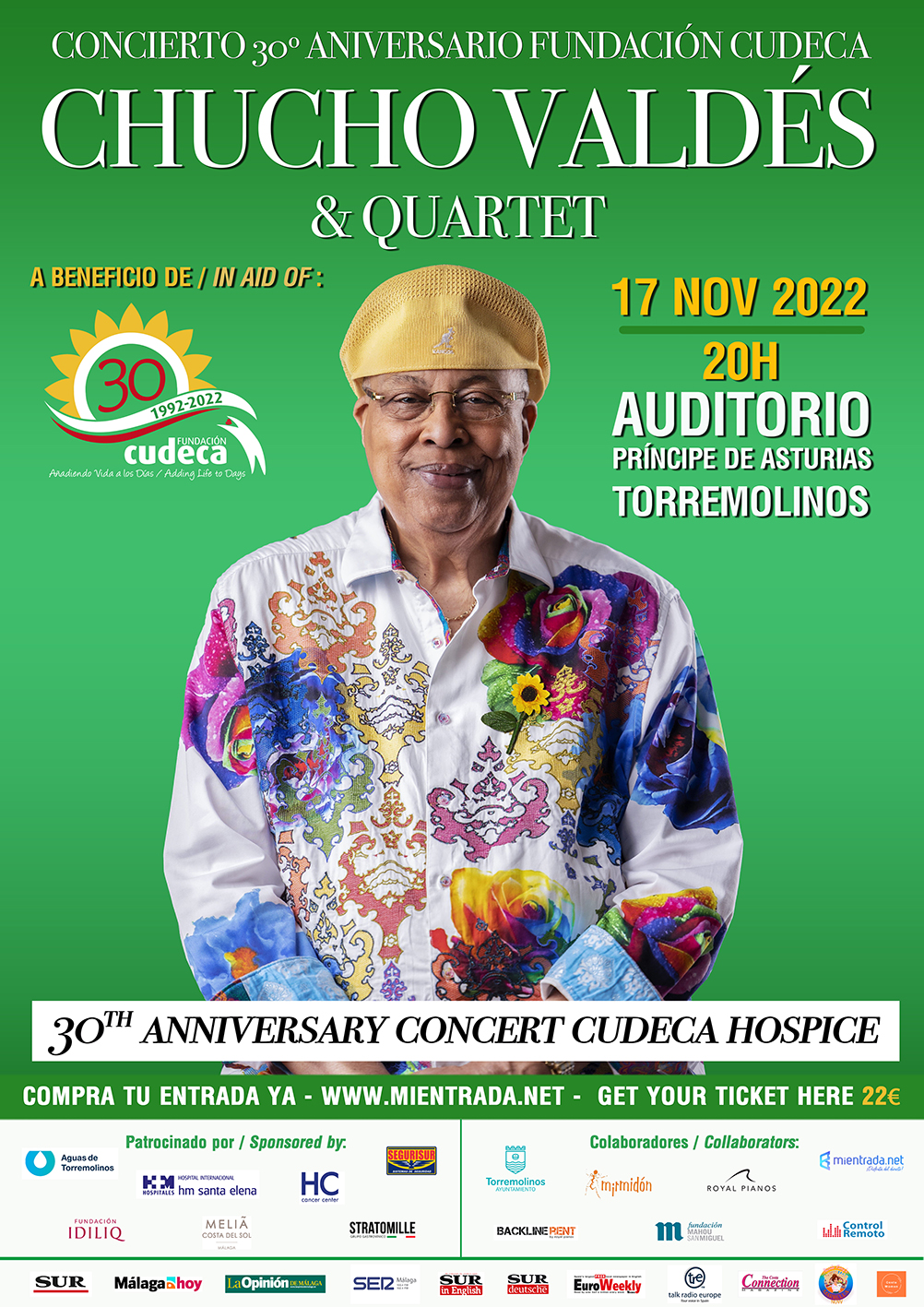 This solidarity concert will take place at the Príncipe de Asturias Auditorium in Torremolinos on Thursday, 17th November and embodies the singer's spirit of solidarity and his love for the Foundation.

Tickets can be purchased on the website www.mientrada.net  and are priced at 22€.

2007: The Valdés saga has been closely linked to the Cudeca Foundation since Bebo Valdés gave his first solidarity concert for the Foundation in 2007. In the final part of the show, his son, Chucho Valdés, joined his father to perform a four-handed piece that left an audience speechless to the roar of applause.

2014: This is also not the first time that Chucho Valdés has given a benefit concert for Cudeca; back in 2014, he sang with Mallorcan artist Concha Buika in a tribute to his father Bebo Valdés with Amigos, also in celebration of the 20th anniversary of the Cudeca Foundation.

2015: With great gratitude, Chucho Valdés is appointed Cudeca's ambassador in 2015.

July 2022: Chucho Valdés is awarded the Joan Hunt Award to the individuals and business groups from the foreign community in the province of Malaga who have acquired most relevance in the year for their solidarity action, thus receiving the Joan Hunt Award from the Malaga Provincial Council in the category of "Culture".

Chucho Valdés, the most influential figure in modern Afro-Cuban jazz is considered one of the best pianists in the world. Winner of 7 Grammys and 4 Latin Grammys, as well as the Latin Academy of Recording Arts and Sciences Award for Musical Excellence. His name is in the Latin Songwriters Hall of Fame.

He will be joined on stage by José Gola (double bass/electric bass), Dafnis Prieto (drums), Roberto Jr. Vizcaino (percussion).  "The quartet fascinates me, it opens up my imagination," says Chucho. "The quartet forces you to change conceptually, it makes you think differently. It's a formation that gives me all the melodic and harmonic possibilities, but it also gives me the opportunity to delve into Cuban polyrhythm and African polyrhythms". In his quartets, consisting of bass, drums and percussion, "sometimes the piano is part of the percussion base".

The Cuban pianist, composer and arranger has left his mark in every formation he has chosen to express himself and in every musical style he has ventured into.

In his extensive career spanning more than 60 years, Chucho Valdés has excelled as a pianist in large orchestras, as well as founding and directing 'Irakere', the small big band that achieved the fusion of Afro-Cuban ritual music with elements of Afro-Cuban popular music and classical music, jazz and rock, which was a transcendental innovation in Latin jazz.

Dionisio Jesús 'Chucho' Valdés Rodríguez was born into a family of musicians in Quivicán, Havana province (Cuba), on 9 October 1941. His first teacher, and his greatest influence, was his father, the pianist, composer and bandleader Ramón 'Bebo' Valdés.

Chucho Valdés has accompanied singers and trios, and has also composed works for orchestras and large groups. The most recent, 'La Creación', is a three-movement suite for small ensemble, voices and big band, which tells the story of creation according to the Regla de Ocha, the Afro-Cuban religion, known as Santeria. La Creación' was premiered in November 2021, to celebrate his 80th birthday.

But without a doubt, for Chucho Valdés one of the most important events of 2022 has been the musical reunion with his old friend and companion in musical adventures, the clarinetist, saxophonist and composer, Paquito D`Rivera. Over the past 42 years, their paths have rarely crossed, but they have played together again, recorded a new album, 'I Missed You Too', and launched a world tour to celebrate this reunion.