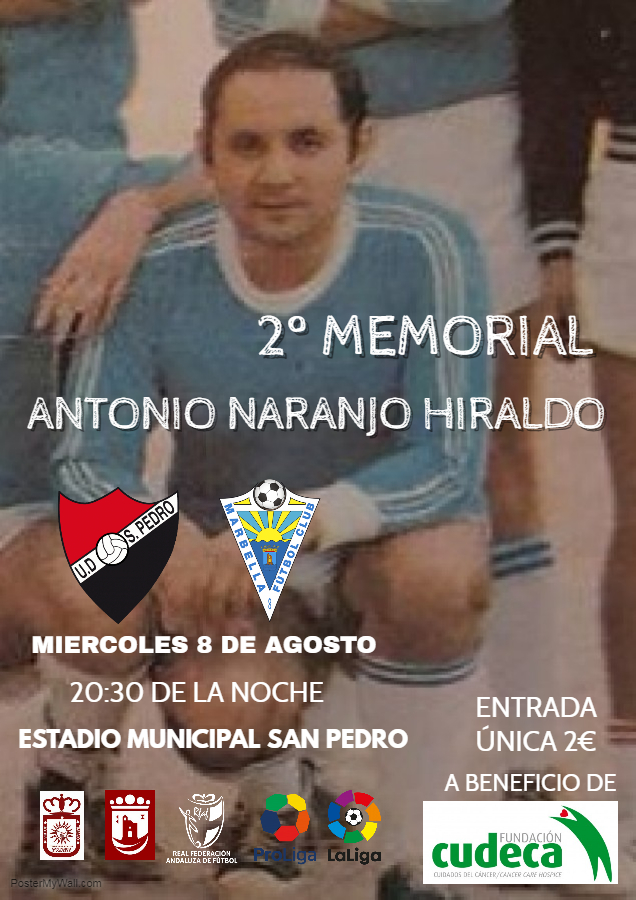 On August 8, at 8:30 p.m., in the Municipal Stadium of San Pedro Alcantara, the II Antonio Naranjo Memorial will be held for the second consecutive year to help us.   The U.D. San Pedro and Marbella F.C. will meet in a friendly match to commemorate the anniversary of the death of the former president of honor of the club and historian and chronicler of local football, Antonio Naranjo. This way, the two main entities of the town recognize and thank the work that Naranjo always performed in favor of the sport in the city.   This second edition will be dedicated to raising funds to help us through the charity €2 entrance ticket, which will be given entirely to our cause.   The president of the entity, Oscar Escobar (from the U.D. San Pedro) said that "last year we celebrated the first edition and announced that we were to continue with this recognition to Antonio Naranjo who gave so much for the local football and, especially, to the U.D. San Pedro"; in this sense, he wanted to "thank Marbella F.C. for the good energy that they have displayed since the beginning collaborating in the Memorial".   We  would like to express our deep gratitude for the commitment of the U.D. San Pedro and the solidarity of their members and community, as well as their great enthusiasm to be part of a beautiful derby for the second consecutive year inspired by a figure as dedicated to his people as Antonio Naranjo.