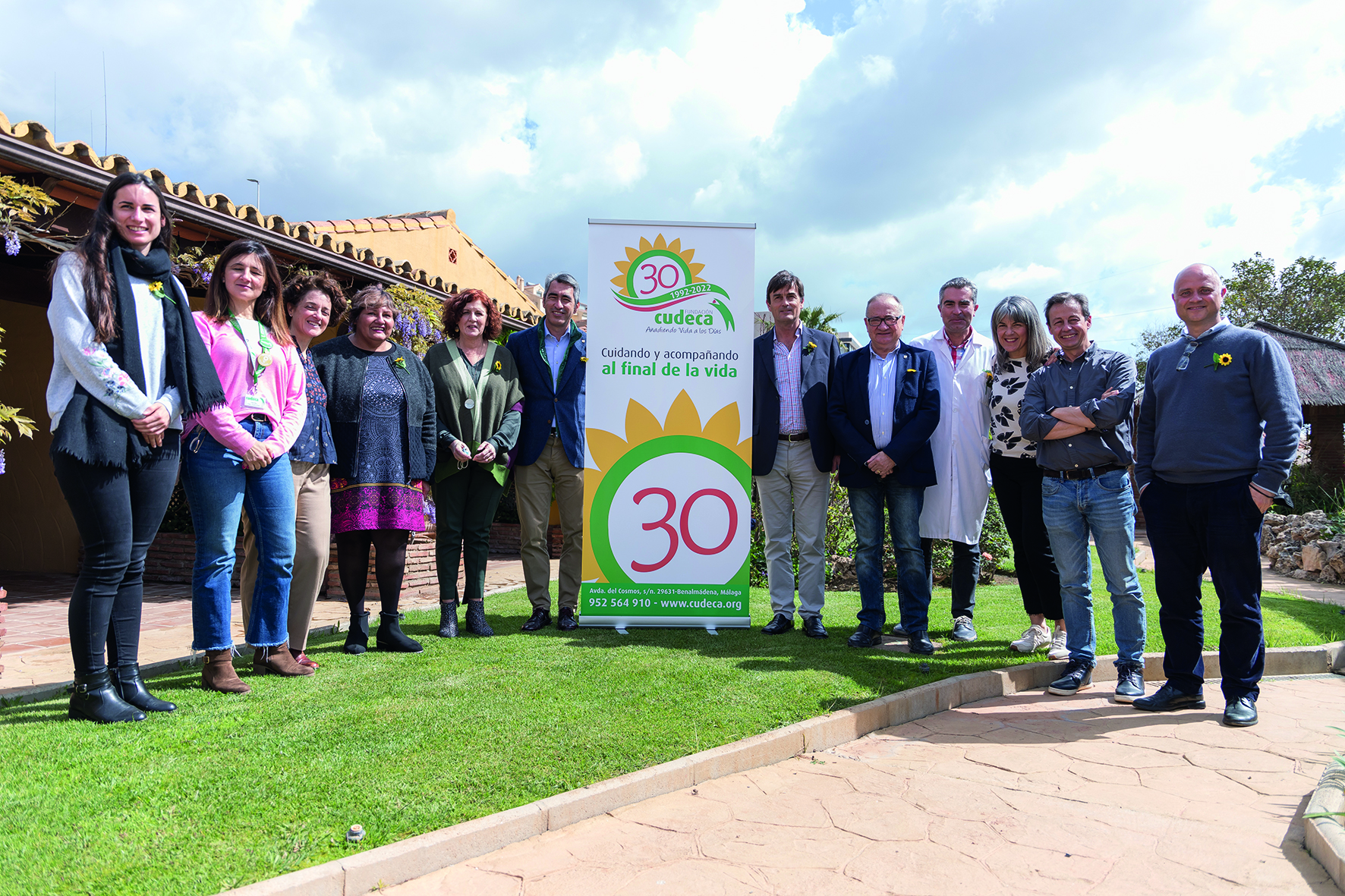 On Wednesday 30th March, Cudeca Hospice held an event to present its 30th anniversary campaign, detailing the agenda of activities and events.

Dr. Marisa Martín, Chief Executive & Medical Director, founder together with Joan Hunt of Cudeca Hospice, opened the event by explaining what this anniversary means: 30 years of caring in a very special way for more than 17,000 people with cancer and other advanced illnesses. Adding life to their days, as the Foundation's motto says. Many lives touched and much life added.

A project that in 30 years has received the unconditional support of the whole of Malaga community, which generously sustains it: 2,150 regular donors, 900 volunteers, general donors, private companies, town councils, Malaga Provincial Council, Ministry of Health and Families,... which makes this palliative care project a reality, a national and international reference, currently with 105 professionals, including doctors, nurses, auxiliary nurses and support staff, psychologists, social workers and physiotherapists. Special mention must be made of the resident ex -pat community, especially the British, who were the main and almost the only support in Cudeca's first 15 years: the word "hospice", the sunflower, so defining of Cudeca's essence, are imported from the UK, the cradle of palliative care.

This was Joan Hunt's vision, who left us in June last year, a vision that is now more than fulfilled, and full of life, never better said: 2022, this symbolic anniversary is already full of exciting growth projects: The Paediatric Palliative Care Unit, which will begin to take shape in September, with the inauguration of Paediatric Palliative Care Room No. 10, a very specific resource for children and adolescents; and the Yusuf Hamied Centre for Studies and Research in Palliative Care, which will be inaugurated on 20 April, and which has the vocation of becoming an international reference centre in this field. 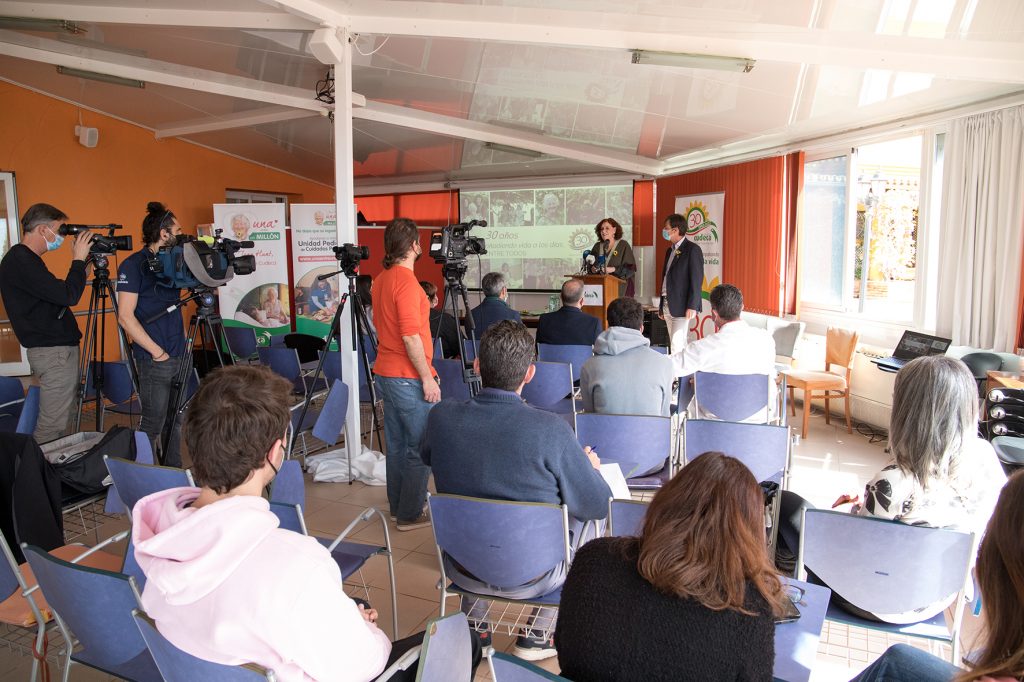 Among the events that will celebrate this anniversary, in addition to those mentioned above, are the Cudeca Walkathon, on 28th May, which this year will be in person after two years of virtuality; a Scientific Conference on Paediatric Palliative Care and Volunteering, which will take place in October and November; and a charity concert at the Cervantes Theatre in Malaga, on 30th November - artist to be confirmed.

The event was attended by the Mayor of Benalmádena, Víctor Navas; the Councillor for Social Services, Alicia Laddaga; and the Councillor for Health, Juan Carrillo; and on behalf of Cudeca Hospice, the Chief Executive & Medical Director, Dr. Marisa Martín, and the Deputy Chief Executive & Financial Director, Rafael Olalla; and part of the Cudeca team. 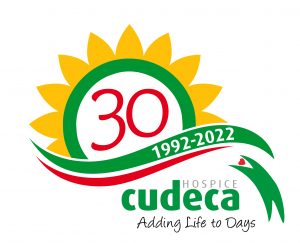 20 April - Inauguration of the Yusuf Hamied Centre for Studies and Research in Palliative Care.

September - Inauguration of room 10 of the Paediatric Palliative Care Unit.

November - Auction for Life together with Cadena Ser.

30th November - Charity Concert in the Cervantes Theatre in Malaga.

CUDECA: 30 years caring and accompanying at the end of life

The Cudeca Hospice was born in 1992 from the personal commitment of Joan Hunt, an English resident of the Costa del Sol, after the experience of losing her husband to cancer. When Joan Hunt's husband was admitted to hospital in Malaga, they found themselves in a complicated environment and faced with a language they did not understand. Everything changed when her husband was transferred to the newly opened Palliative Care Unit at the Red Cross Hospital. There he found a team of doctors and nurses specialised in palliative care; and where Cudeca's current CEO and Medical Director, Dr. Marisa Martín, was located.

Every year, Cudeca Hospice cares for and accompanies more than 1,700 people with cancer and other advanced illnesses, and offers support to more than 2,200 relatives; thanks to the more than 100 workers who make up the foundation - most of them medical care personnel.

Since 1992, Cudeca Hospice has already cared for and accompanied more than 17,000 people with cancer and other advanced illnesses through its care teams made up of doctors, nurses, psychologists, social workers, physiotherapists, nursing assistants, and qualified volunteers. Always completely free of charge.

The Foundation has a Palliative Care Centre located in Benalmádena where all its care is centralised, and in which its main programme, Home Care, stands out. This programme has 7 teams, each consisting of a doctor and a nurse, and is complemented by psychologists, social workers and physiotherapists to offer care adapted to the situation of each patient. A home care team travels more than 20,000 kms. a year, visiting an average of 200-250 patients. Continuous monitoring is also carried out by both the medical and psychosocial teams through telephone calls, home visits and outpatient consultations at Cudeca's Palliative Care Centre.

To complement this care, at its Palliative Care Centre located in Benalmádena, the Hospice has a In-Patient Unit for patients with a more complex condition, with symptoms or needs that are difficult to attend to at home; and a Day Unit and Rehabilitation and Physiotherapy Programme with the aim of improving patients' quality of life in all its facets, through physiotherapy, complementary therapies, image care and social and cultural activities. In 2021, a total of 204 patients were admitted to its In-Patient Unit.

Cudeca Hospice also has other assistance programmes that complement its care: Psychological and Social Care Programme with the essential support of the "la Caixa" Foundation, Outpatient Consultation, Information and Advice.

1992 Creation of the association "Cudeca" and first charity shop in Fuengirola.

1999 Constitution of the Foundation's Board of Trustees.

2002 Joan Hunt awarded the Order of the British Empire (OBE) by Prince Charles.

2003 Inauguration of the Day Centre and Rehabilitation and Physiotherapy Programme.

2004 Completion of the Palliative Care Centre.

2005 First patients in the In-Patient Unit.

2008 Cudeca included in the Integral Care programme of "la Caixa".

2013 Cudeca receives the Gold Medal of the Provincial Council of Malaga.

2015 Special Distinction for the Day of Andalucia from the Junta de Andalucía.