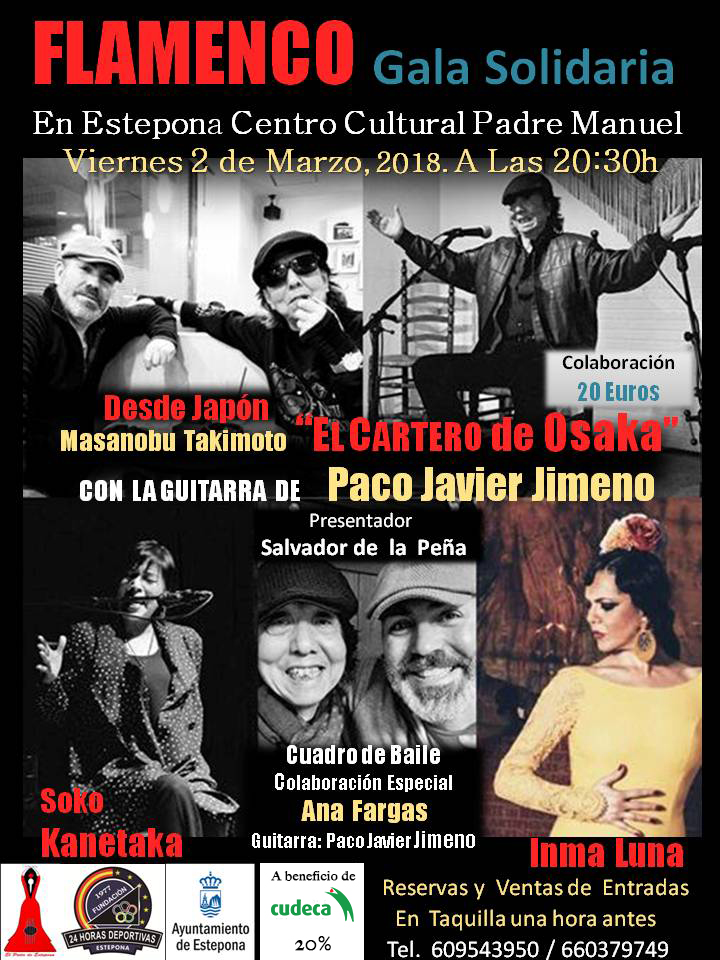 The Japanese cantaor (Flamenco singer) Masanobu Takimoto, better known as "El Cartero de Osaka", will celebrate a charity concert in aid of the Cudeca Foundation on Friday, March 2, at 8.30 pm. This performance will take part on the 1st International Flamenco Festival, organized by the Estepona Fundación 24 Horas Deportivas and the Estepona Flamenco association 'El Patio' in collaboration with the delegation of culture of the Town Hall. The concert will take place at the Padre Manuel Auditorium. The deputy mayor of the sociocultural and services area, Blas Ruzafa, highlighted the singularity of the event since, for the first time in Estepona, a flamenco concert is being held with internationally renowned Japanese artists such as Masanobu Takimoto and singer Soko Kanetaka. The list of artists will be completed with the flamenco dance crew of the Inmaculada Luna Recha school in Seville, the flamenco singer, Ana Fargas, and the guitarist and composer, Paco Javier Jimeno. The event will be presented by the journalist and member of the National Association of Flamenco Critics, Salvador de la Peña. Twenty percent of the proceeds will go to the Cudeca Cancer Care Hospice, which care for many advanced cancer patients. Tickets can be booked and sold by telephone 609543950 / 660379749 or at the ticket office one hour before the concert starts. Due to the limited seating capacity of the auditorium and the fact that seats are not numbered, it is recommended to purchase them in advance. Voice: MASANOBU TAKIMOT, 'El Cartero de Osaka" (Born in Osaka in 1952). He was only 9 years old when he started playing flamenco guitar. He is currently the dean of Japanese singing, a life dedicated to the flamenco art and considered as a reference and one of the most important teachers in Japan. Since he was very young, with his guitar and his hobby, he learnt from the first flamenco figures who wandered through the main halls of his country. After 50 years immersed in flamenco, he comes to Estepona with the prestigious guitarist, Paco Javier Jimeno, after having toured together in the Land of the Rising Sun last November. This year, just like last year, the Japanese maestro will be one of the artists invited to the Jerez Festival. Throughout his life he has participated in the most important flamenco events in Japan and Spain, always with great success; considered and respected by the whole flamenco scene.