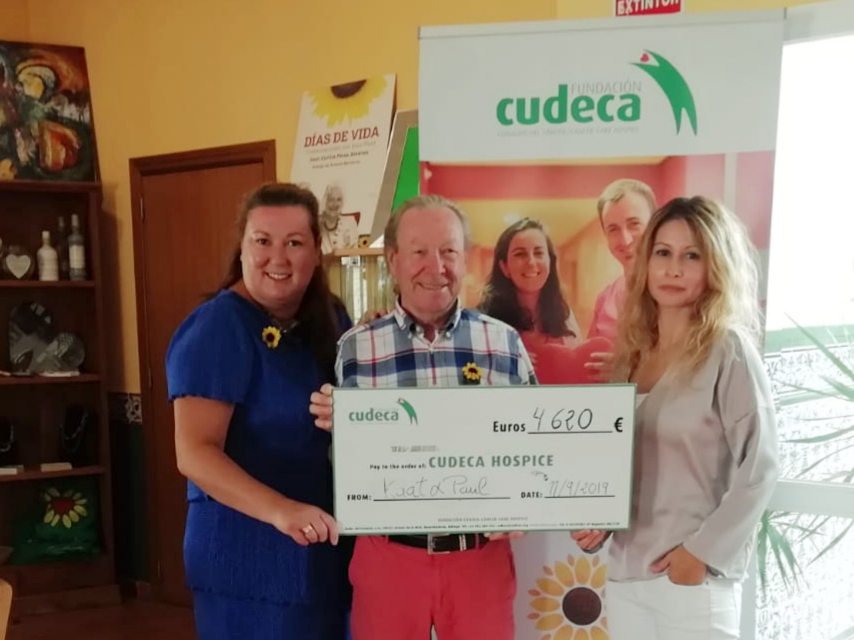 On Friday 30th August, 150 people attended a Charity Dinner organized by “Cafetería Miel” in Sabinillas but it was held at the “Roman Oasis” restaurant (Manilva) which closed its doors last year after 36 years. The restaurant opened its doors once again with the aim to raise funds for Cudeca Cancer Care Hospice.   Everyone paid an all-inclusive price of 50€ enjoying a fantastic evening with two different music acts, a tribute to Cher By Michelle Daniels and the duo actof Mark and Kelly. The food consisted of an extensive starter buffet followed by a hog roast with all the trimmings and  ended with a desert buffet and cheese.   A big part of the funds were raised by a Wheel of Fortune, where the guests could win lovely prizes donated by locals and business owners for 5€ a spin, and the auction of a designer handbag.   Paul Hickling owner of the “Roman Oasis” restaurant and Kaat Buelens, the organizer, raised a total of 4.620€ for Cudeca thanks to the generosity of the community attending the event. All the proceeds raised  will go entirely to cover the cost of the professional medical care offered to patients suffering from cancer and other advanced illnesses, as well as support to their families, all of which Cudeca gives completely free of charge.   “We chose Cudeca because 2 people we know very well had a parent that stayed at Cudeca Hospice and were very impressed about the organization and grateful in those difficult times”, commented Kaat Buelens to Cudeca representative.     The Cudeca Hospice would like to deeply thank Kaat and Paul Fisher organizing this charity dinner in a totally altruistic and supportive manner with the sole aim of raising funds to support the charity.