On Sunday 14th August, Alhaurín Golf Club has a very special date with Cudeca Hospice with a tournament organised to appreciate their work and dedication in helping people at the end of life.   Benjamin Kamu has organised this tournament in memory of his mother who passed away in October last year and was cared for by Cudeca Hospice. Benjamin, in his own words, commented that "without Cudeca's help, my mother would not have lived her last 6 months with her children.  Without Cudeca Hospice my mother would never have found her peace and tranquillity". After the death of his mother, Benjamin, a haute cuisine chef, decided to dedicate his life to raising funds for gall bladder cancer studies, along with his challenge to change his career at the age of 30 and become a professional golfer, as he promised his mother, who was a very keen golfer herself. At this charity tournament all  proceeds will be donated to  Cudeca Hospice. "We don't want a federated tournament where the most important thing is to win and lower the handicap," explains Benjamin. "The most important thing on this day is to come and enjoy the company of your friends and loved ones, and I am very happy for the response of several sponsors who have donated many different prizes for the tournament.   Although Cudeca Hospice has continued to care for all its patients, the pandemic crisis has dealt a severe blow to the charity's finances, particularly the effect on its main source of income, the charity shops, which had to close for two months and they are now trying to recover their sales.  Also, fundraising events have ground to a halt. As the pandemic continues to rage, Cudeca Hospice is facing increased uncertainty and experiencing very worrying losses. By the end of 2021, losses could amount to between €700,000 and €1 million.   Details of the tournament:   Registration for the tournament is €59 for adults, €54 for juniors and €35 for Alhaurín Golf members.   Registration email: info@figueroagolf.com phone: 674 482 777 - 628 583 169.   Registration until Friday 13th August and payment in cash on the day of the tournament.   The price includes green fee, shared buggy, prize giving and fundraising auction. Participants will also enjoy a tasting at the end of the tournament served by Restaurante La Lucha, one of the collaborators. Categories and prizes will depend on the number of players. Prizes for the 3 best results in each category and also special prizes.   The tournament is Fourball Stableford Pairs and depending on the number of players there are two or three categories. Category 1: Mother/Father + Daughter/Son Category 2 (& 3): Couples   There is a special prize for the couple with the best scratch result. There will also be 4 prizes in each par 3 for closest ball and longest drive. 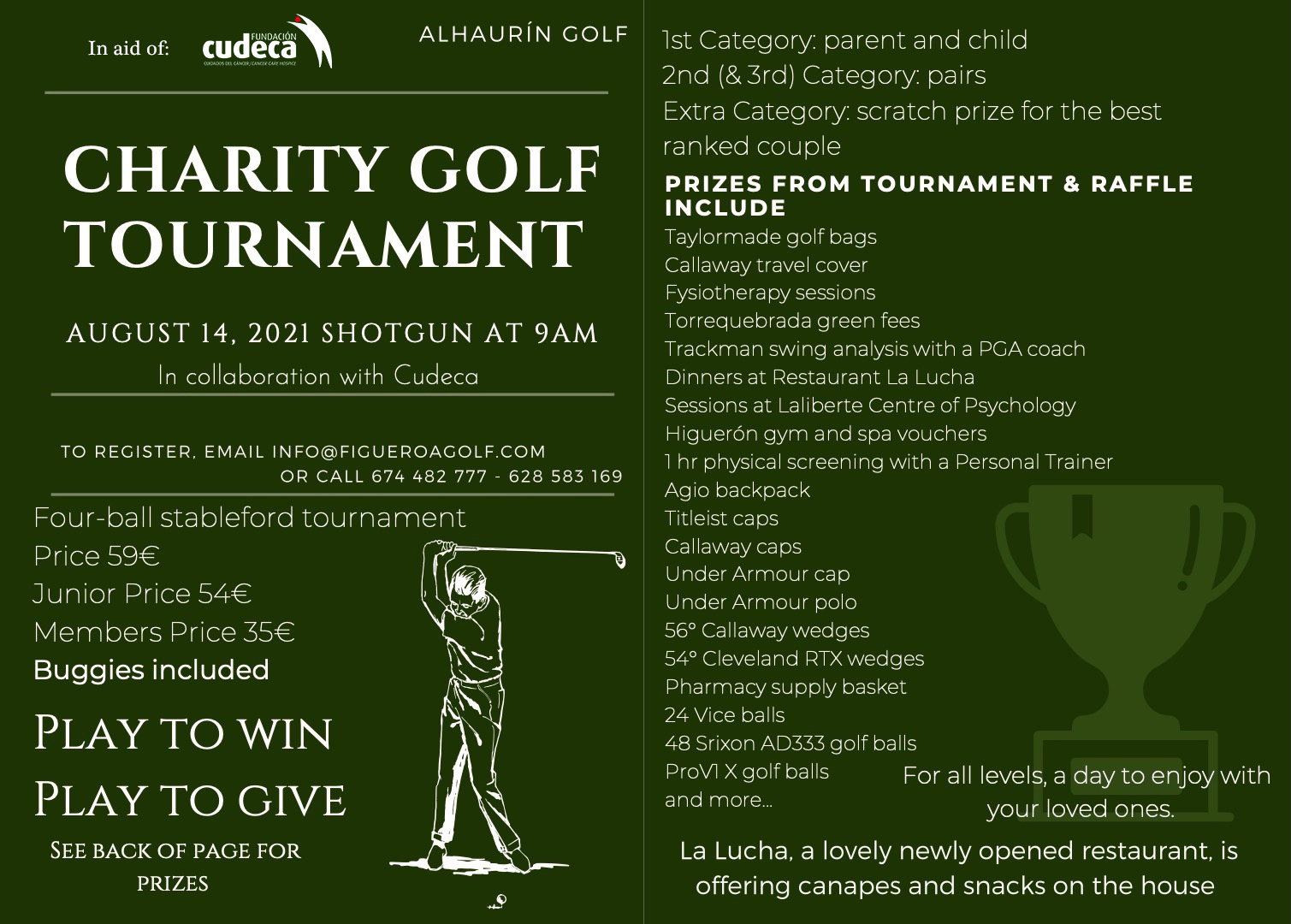