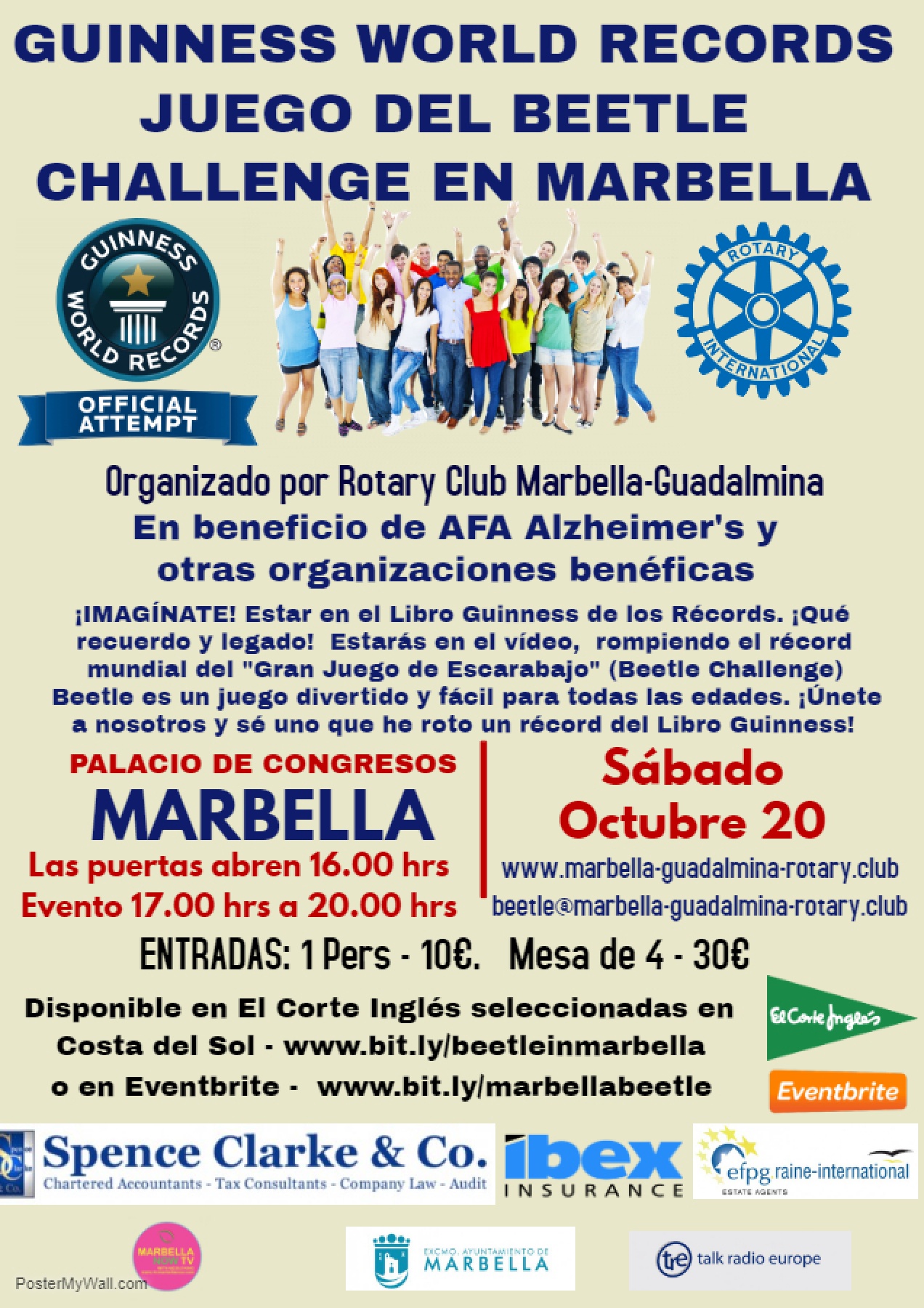 On Saturday, 20th October from 4pm, the first English Speaking Rotary Club on the Costa del Sol will hold the Guinness World Records – Official Attempt – Beetle Game Challenge at Rotary Club Marbella – Guadalmina at the Palacio de Congresos in Marbella in aid of many different charities, including Cudeca Cancer Care Hospice.   Doors will be opened at 4.00pm and the event will start at 5 PM until 8PM. A minimum of 256 players are needed to beat the record. Tickets are available at El Corte Inglés for a purchase of a physical entrance ticket; or online at these two sites: www.bit.ly/beetleinmarbella and at Eventbrite on www.bit.ly/marbellabeetle. Entrance tickets cost: €10 (single) & €30 (table of 4).   This Guinness World Records Beetle Game Challenge (official attempt) in Marbella has been organized by Rotary Club Marbella – Guadalmina in aid of many different charities as AFA Alzheimer and Cudeca Hospice. For all attendees, this will be the perfect opportunity to become a holder of a Guinness World Record. The event will be filmed, as the record of the Biggest Game of Beetle in the world is smashed. There will also be wine & food bar, music and entertainment during the game, as well as many prizes including a Golden Beetle, plus Hogan´s Guinness.   Many different charities will hold a stand of their own to promote their local causes, among all Cudeca Cancer Care hospice will be found holding a table with information, tins and sunflowers to sale. Guests and attendees will have the chance to get to know more about CUDECA when approaching the stand and purchase a sunflower for a voluntary donation. The CUDECA volunteers will also give information on how to become a regular donor, organize a charity event and how to locate a tin in your business. The money raised in this event will go to the local charities exhibiting there.   What is a Beetle Drive? A Beetle Drive is a mass game of Beetle and is played with pencil, paper and dice. It´s a fun game for all ages from 5 to 105. Players have one dice for every group of 4, but all play as individuals. They must roll certain numbers to be able to draw all the parts of a Beetle.   The first person in the hall to complete a Beetle, shouts “Beetle” and wins a prize. Each body part has numbered values and they must be drawn in a specific order to completing the Beetle. It is not as easy as it seems and more fun than it may sound.   Winners at each table plus one other then move to a different table and another round begins. Before and after the drive there is food, music and entertainment. And plenty of time to visit sponsors´s stands, NGOs and exhibitions. Guinness World Record Events generate excitement and interest from the public and the media. This is an official event and can use the Guinness World Records logo and merchandise. 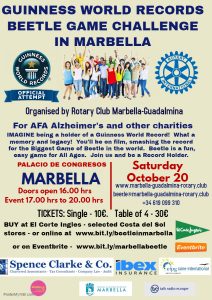