La Sala Group and the Elena Gaite Foundation donate €10,000 to our Cudeca campaign “Joan Hunt, one in a million”

Last December 2021, the La Sala Group and the Elena Gaite Foundation donated €10,000 to us to join our crowdfunding campaign "Joan Hunt, one in a million", which aims to raise €1,000,000 to create and manage the Cudeca Paediatric Palliative Care project for 4 years.

This project will include the specialised comprehensive care and compassionate accompaniment of children and adolescents, as well as their families, including not only parents, but also siblings, grandparents, aunts and uncles... the whole family. A team of expert professionals: doctors, nurses, psychologists, social workers, physiotherapists, music therapists, art and play therapists, teachers, and volunteers, would attend both in the homes and at the Cudeca Centre, in room number 10 or at the Day Centre.

Joan's house, paediatric room number 10. A central part of this project is the remodelling of the house where Joan lived her last years, built and paid for by herself. Located next to the Cudeca Hospitalisation Unit in Benalmádena, it will be converted into a space completely adapted to deal with such special situations, familiar and homely, with its own kitchen and a small garden overlooking the sea.

Elena Gaite Foundation. The Elena Gaite Foundation has recently been set up to help charitable causes, in particular, to support the cause of the Cudeca Foundation, with the intention of raising funds in Elena's name and maintaining her legacy of unceasing help to others as an inspiration and example to all those around her. Elena, recently deceased and unforgettable to all her colleagues, friends and family, was instrumental in making La Sala what it is today, one of the most important hospitality enclaves on the Costa del Sol. Elena's husband, John has supported the La Sala Golf team throughout 2021 by helping out at every event, and has managed to get incredible prizes for the raffles and charity auctions. All proceeds from La Sala Golf tournament days go to the Elena Gaite Foundation in support of the Cudeca Foundation, DEBRA - Piel de Mariposa and AVOI, as well as to help the family of the firefighter who lost his life in the forest fire that hit the mountains last year, among other important charitable causes. In this first year of solidarity activity by the Elena Gaite Foundation and La Sala Group, they have managed to raise €25,000. 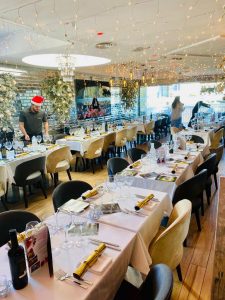 Ian Radford, La Sala Group Chairman, said: "It was great to return to the fun golf days of 2021. Seeing so many of our regular golfers enjoying the day makes all the effort worthwhile. I would like to take this opportunity to thank everyone for their continued support. We continue to raise money for some great local charities; I think we could do more through the prizes on offer for the raffle and auction. This is something we will be focusing on next season, with the aim of raising as much as possible for some great causes. One of our main charities, and I have heard about their new initiative where they are creating a new wing at the Hospice just for children as Joan Hunt, their founder passed away and left her home for this project. The campaign is called "One in a million", in reference to Joan herself. I think it is something we should support, so we will be increasing our efforts in this regard. I'm sure you've all met John Frutos at the events and conducting the raffle. It has obviously been a very hard time for John and his family, but I know that these events to support charities, especially Cudeca in memory of Elena mean a lot to him. Any support that helps us to keep on climbing is very much appreciated."

For his part, John Frutos, said movingly: "I want to thank Cudeca for the help they gave Elena and my family during her last days and to say that both the Elena Gaite Foundation and La Sala Group will continue to support this indispensable cause for our community, that of palliative care. I am also very grateful for Ian Radford's support and help during the most difficult times for me”.

Our CEO and Medical Director  added emotionally, Marisa Martín: "This generous contribution from La Sala Group is a great joy that will bring a great deal of growth to our project of creating Cudeca's Paediatric Palliative Care Hospice. I would like to warmly thank the solidarity of the Group, but also the kindness and dedication of John Frutos and the exemplary attitude of all the golfers and friends of La Sala. Thank you very much".

The La Sala Group will be able to see its name permanently displayed in Joan Hunt's house, once it has been fitted out in the Paediatric Palliative Care Hospice of the Cudeca Foundation.