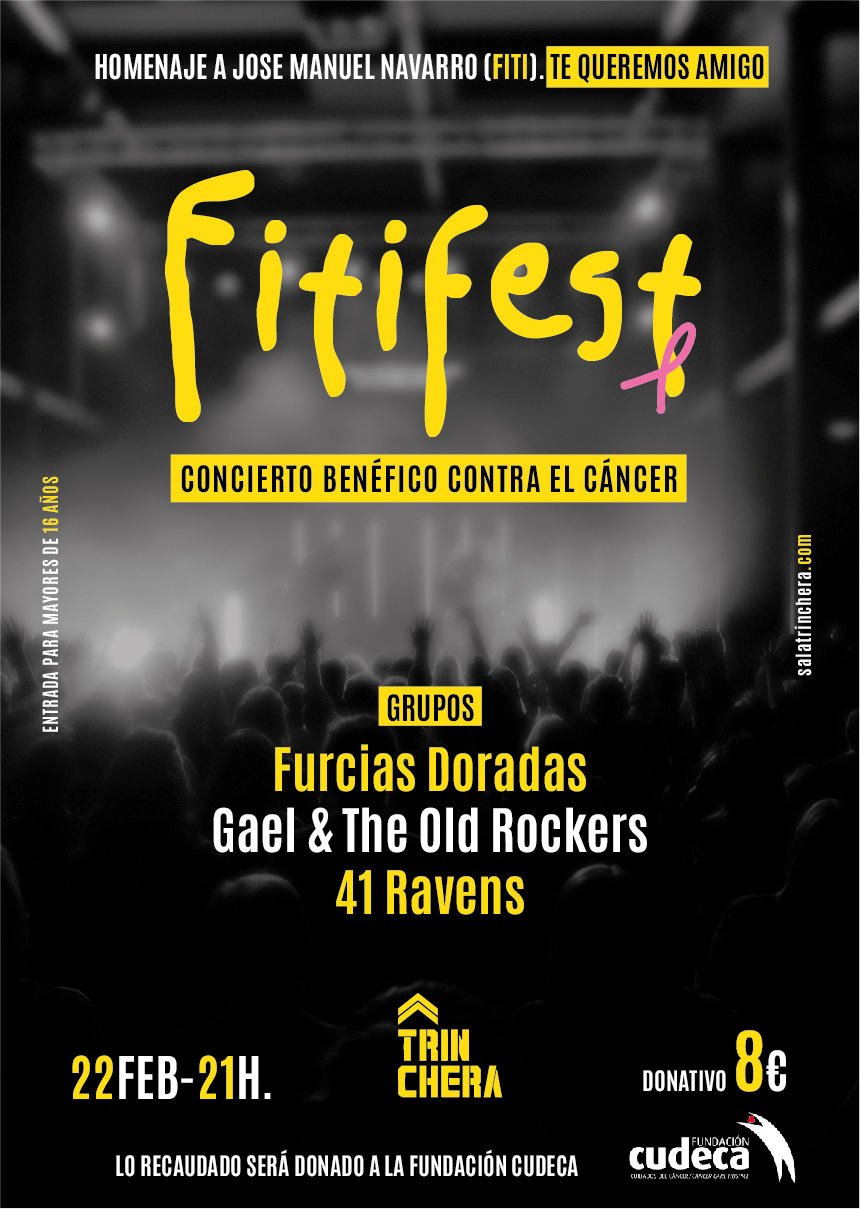 Fitifest returns, the benefit concert in memory of Fiti (Jose Manuel Navarro) vocalist of Trifulca. It will take place in the Sala Trinchera on 22 February at 9pm. The proceeds will go entirely to the Cudeca Hospice.

Tickets/donation of 8 euros can be purchased at the box office of Sala la Trinchera and at www.entradium.com

In this second edition, the formations Furcias Doradas, Gael & The Old Rockers and 41 Ravens will participate in solidarity.

41 Ravens:
A hard rock band based in Malaga. Its members come from different formations and after some time of preparation they jumped to the stages in 2018.
The acceptance of the public was quick and in 2019 they were proclaimed winners of the festival at national level IZNAROCK and were chosen BAND OF THE MONTH by the international radio RADIOVEGAS.ROCKS based in Las Vegas.
From their powerful performances came the songs that make up their debut EP "VOID EMPIRE" which they are presenting live at this 2020 event.

Gael And The Old Rockers:
Gael and The Old Rockers, is a blues rock band from Malaga led by young Gael Ruiz on guitar, created in 2016 when he was only 14 years old. Currently the band is composed of Pili Olivares on bass, Carlos de Miguel on drums, Angel Ruiz on vocals and Gael on guitar.

Furcias Doradas:
Furcias Doradas is a sarcastic rock band, but it's a lifelong rock band, pawana pawana, pawana nana and stuff. Unfortunately it was also the last band in which our friend José Manuel "Fiti" took an active part, developing his last melodies and lyrics. As a tribute and a token of love to him we want to carry out this concert and we hope that it will serve a good cause, as well as raise awareness in society. It is also our intention to persevere in this initiative so it becomes an annual milestone for this cause, thus contributing our grain of sand through music and a night of fun and local culture.

The festival was born through the initiative of the band Trifulca, colleagues of Fiti, Jose Manuel Navarrono "not only to remember him, but also to remember all those who suffer or have suffered from this disease and to be able to do our bit to help those who are in this situation", he began singing in rock groups very early in his life. The group that made him best known in Malaga and also nationally, was Trifulca, with which he stayed 10 years. With them he won competitions such as Malaga Crea Rock, REcBand (Huesca), Nueva Carteya (Cordoba), Rockenfrio (Jaen) and 3rd in Villa de Bilbao. "Fiti was a person very much loved by all his friends, very sincere and transparent, good and honest", says Cristo Arana, one of the organizers of the concert and a close friend.

We thank the solidarity of the organizers of the concert for thinking of the Cudeca Hospice and we hope that you can attend this musical event of solidarity.