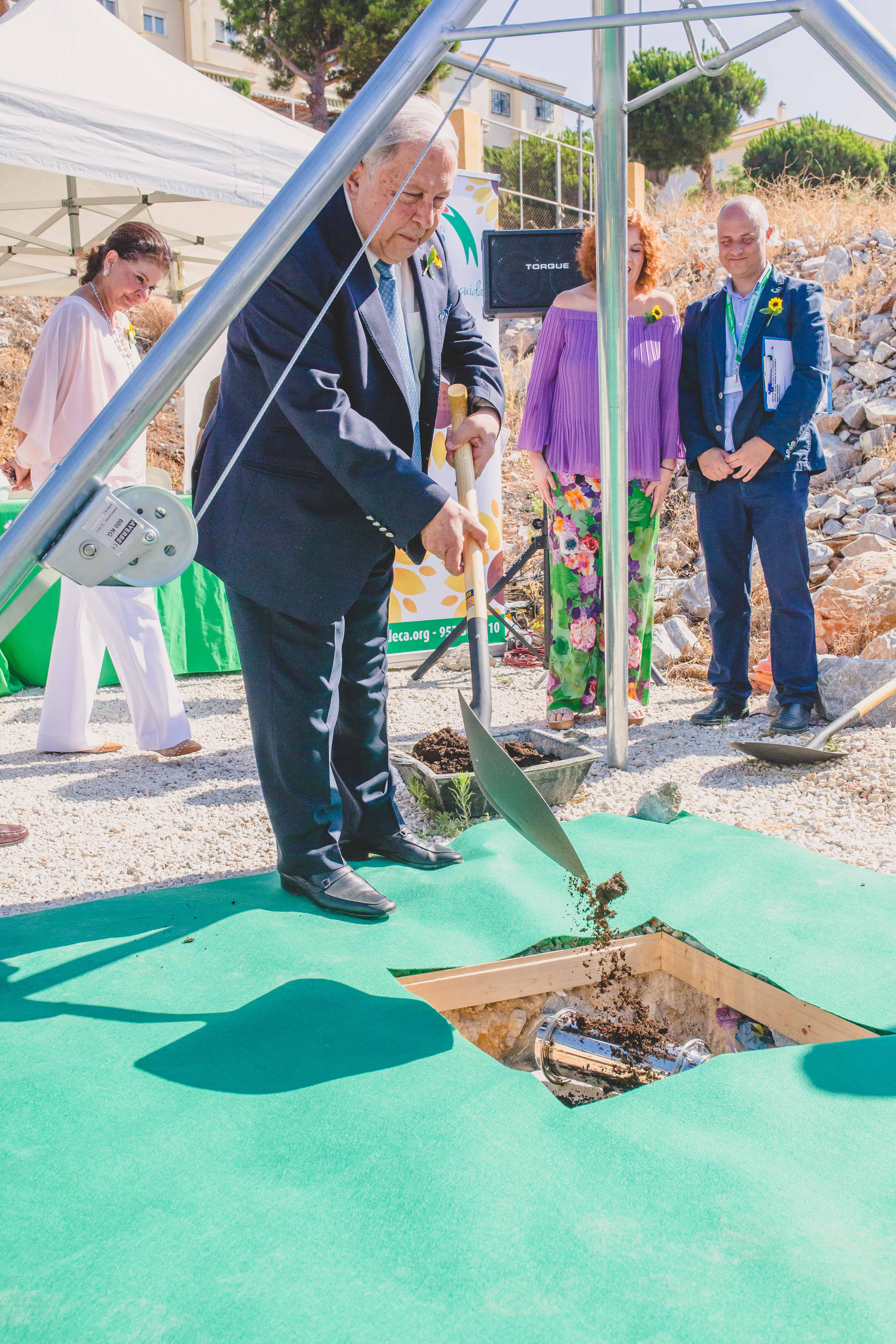 On July 27th, Cudeca Hospice celebrated the act of the first stone of the construction of the "Yusuf Hamied Training & Research Centre" Cudeca Hospice Foundation, located on the land adjacent to its current headquarters in Benalmádena. The event marks a milestone in the history of Cudeca, a recognition of its more than twenty-five years of experience in the treatment and care of people with advanced and non-curable illnesses.

The event was attended by the Government Delegate in Málaga, José Luís Espejo; the Delegate of Health and Equality of the Junta de Andalucía, Ana Isabel González de la Torre; the Mayor of Benalmádena City Council, Víctor Navas; the Mayor of Mijas, Juan Carlos Maldonado; the second Vice President of the Diputación Provincial de Málaga, Ana Carmen Mata; and the Vice-rector of Students of the University of Málaga, José Francisco Murillo. On behalf of the Cudeca Hospice, its Founder and Honorary President, Joan Hunt O.B.E; the President, Ricardo Urdiales; and the Chief Executive & Medical Director, María Luisa Martín.  And the star of the event, Dr. Yusuf Hamied, president of CIPLA, with his wife Farida Hamied, benefactors of CUDECA and architects of the construction of the new Training Centre. There were also volunteers, representatives of different public and private entities, and friends of the Foundation.

Ricardo Urdiales recalled at the beginning of the event, the 26 years of assistance and free care that Cudeca has offered to thousands of people. Thanks to that experience and the learning acquired, "it is time to take another step to ensure our work, in your name and in those who will still need Cudeca's care. The Foundation feels that, after these years of knowledge and care practice, it is already in a position to scientifically contribute its valuable experience in palliative care ". He pointed out that the best way to do this is to build a Centre dedicated to training professionals of all levels and fields to improve the quality of palliative care, and to develop innovative intervention and research models at the same time. "Ultimately," Urdiales adds, "a leading Training and Research Centre." However, CUDECA does not have sufficient capital, it is easy to guess. All the fundraising efforts carried out with the support of the community are invested in the CUDECA assistance project. Therefore, the construction of the centre has not been possible so far thanks to the extraordinary generosity of the benefactor, Dr. Yusuf Hamied’s donation. Thus, CUDECA will be able to build a Centre for Studies and Research in Palliative Care that will make the foundational vision of contributing to the formation of professionals who know how to add life to the day, using Cudeca's "special kind of caring".

The Centre will fulfill two objectives: to train future specialists in palliative care through teaching and research, and to finance part of the care work of Cudeca. This Centre will be a complementary source of income, which will help to cope with the increase in patients treated, which has doubled in the last five years.

Dr. Yusuf Hamied commented "It is an honor and a privilege for me to be here, I know that my company is related to health, it is a pharmaceutical company called CIPLA, but when it comes to health it is not only a business but also a humanitarian work. In 1996, I got in touch with palliative care for the first time thanks to a NGO of nurses in the United Kingdom, and this was what led to the creation of a Hospice like CUDECA in India 20 years ago. For me it was important to create a space to alleviate suffering and where people could have hope. In 2003, we came to Marbella for the first time and fell in love with the city. In 2008 we had the opportunity to meet Joan and her team that was also love at first sight. We have been in a relationship for 10 years and our commitment is to last 10 years or 20 more years. I am a Scientist and I firmly believe in research and training in palliative care, as a way to expand their knowledge to more health professionals. I have spoken many times to Marisa about the importance of training, and when she presented me the project, I agreed to finance it. Today when I ask about how the plans were going, I found out that they needed more funds to cover the total cost of the centre. And so, today I decided to surprise CUDECA and double the initial amount to which I had committed, to ensure that they can undertake the entire project. I am in charge of building the centre, but you (present institutions) must take charge of continuing to collaborate with the assistance part of CUDECA”. After the words of the rest of the authorities present and of Dr. Yusuf Hamied himself at the event, Ricardo Urdiales, María Luisa Martín and Dr. Hamied introduced different documents and photographs in a capsule; and then placed the capsule in the hole where the first stone was placed next.

The two stones of Joan Hunt
Before finalizing the act, the Founder and President of Honor of Cudeca, Joan Hunt OBE thanked the Dr. Yusuf Hamied his commitment to the mission of the Cudeca Hospice, making possible the construction of the centre. He pointed out that since the beginning of CUDECA, training in palliative care was always present in what they wanted Cudeca to be. And now, 20 years after Joan put the first stone of the Palliative Care Centre, CUDECA could, thanks to the donation of Dr. Hamied, begin the construction of the Centre for Studies and Research. María Luisa Martín, Chief Executive & Medical Director of Cudeca, commented afterwards that "the centre's main objective is to house the training offered by CUDECA to professionals of all levels and branches to improve the quality of care in palliative care. It will offer training for all professionals who in one way or another want to share this "special kind of caring" that CUDECA has for people with advanced and non-curable illnesses”. The Chief Executive explained that training in palliative care will be carried out in the centre at all levels, "from the technical or professional level, to the level of university graduate" and thanked the Vice-rector of the University of Malaga, present at the event, the collaboration of the University of Málaga in the University Diploma and the Master in Palliative Care that the Cudeca Hospice has offered since 2011, aimed precisely at generating intervention and research skills in the clinical, mental, social and spiritual care of palliative care patients

Since its beginnings in 1992, Cudeca Hospice has participated in palliative care training of more than 3,000 professionals from all branches of healthcare. In addition, every year different postgraduate students and professionals carry out internships or training stays at the Hospice Centre located in Benalmádena (Málaga). Only in the last two years, 74 professionals from different countries such as Sweden, Norway, Mexico and several cities in Spain have spent time in the In-Patient Unit, the Day Unit and with the Home Care teams, knowing and working in the field with the Cudeca staff. The Foundation also carries out specific training on the subject for health institutions.

The professionals in Cudeca are teachers of the Diploma and Master Degree in Palliative Care of Cudeca Hospice along with Málaga University.

The income of the Centre will cover part of the cost of the free assistance that Cudeca offers each year to people with advanced terminal diseases. Its purpose is: to take care, relieve, accompany and offer specialized palliative care.