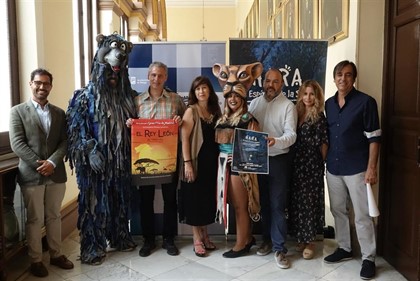 Today have been presented at a press conference in the Malaga City Council , the two musicals that will be represented in the Botanical Garden of the Conception next August where the Cudeca Foundation will manage the bar solidarity 100% for the benefit of the foundation and will be served by staff of the Hospice and volunteers.

During four nights in August, two fantastic musicals will be performed that will delight both adults and children. It premieres, for the first time in the Botanical, on 27 and 28 August, 'The Lion King, The tribute', and the days before, 24 and 25, returns, for the third consecutive year 'Hara, The spirit of the jungle' which is like a second part of the Jungle Book, productions created by Malagueños.

The Foundation hopes to raise funds in this solidarity bar thanks to the help of Cocacola, Victoria beers and the support of the Malaga City Council.

The links of sale of the tickets of the musicals are: